The rash of wind farms on the East Coast is now being extended to the English Channel. The first of these is now under construction off Shoreham.   There was an application for another wind farm just to the SE of Swanage but this development has been refused planning permission and, for the moment, there are no further applications in the pipeline.

A Notice to Mariners was issued on 15th December 2015 giving the co-ordinates of Cardinal Marks which surround the area concerned and which are shown on the large scale chart below: 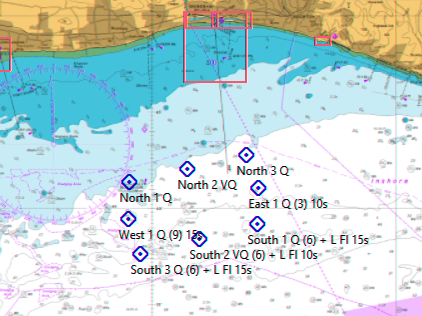 This information has been passed to us first-hand by a customer who almost sailed right into it at night, heading W to the Looe Channel off Selsey Bill. He was warned off by VHF radio

Vessels transiting these waters under engine may not be inconvenienced too much but a yacht tacking against a South Wester may find that they are very much in the way.

Yachts intending to call in to Littlehampton, Shoreham or Brighton Marina will need to plan around the area depending on which direction they are approaching from.

Note the windfarm intersects a direct course between the Solent and the Royal Sovereign.