Your Comments: 10 Read or add your comments

Your first approach here will be interesting! ... read more

As had been said, the visitors berths are at the eastern end.... ... read more

Have your say
10 comments
UPDATE SPRING 2021
Written by Don Thomson 3 | 26th May 2021
I've just noticed that this years Navionics chart has not updated the information on this harbour so does not show the sector light.
UPDATE SPRING 2021
Written by Don Thomson 3 | 24th May 2021
I reviewed these notes in May 2021. I've made the instructions clearer by emboldening them. It really does require a sharp turn to starboard as you pass the Pierhead. Prices have gone up a bit but nothing else has changed.
You NEED to CUT THE CORNER when turning Stb into the harbour entrance!
Written by Mark Harbour Master Sailing Challenge | 23rd Feb 2021
Sep 2020. My boat draft 1.65M. To repeat the instructions above, you need to turn sharp to Stb as soon as you pass the pier head - i.e. cut the corner into the harbour!
We came in about mid flood - about an hour too early! We stuck to mid channel and then turned to Stb once we were opposite the centre of the entrance and we touched the soft bottom. We carried on into the entrance and needed to do a 90' turn to Stb and then reverse into the visitor space Stb side to, on the inside of the wall, immediately to the West of the entrance. We just about touched the bottom at LW but it was fine.
The council HM is Donald Sutherland (07767 311213) is very friendly but not always at the harbour. Lots of people in the village will watch you enter the harbour - especially if you enter too early like we did!
Interesting history in the village and the whole way along this coast.
The RWG sector light to approach the channel from the sea is now operational, but we did not use it as we were concentrating more of centering ourselves on the mid channel by eye.
1 of 1 people found this helpful
UPDATE SPRING 2018
Written by Don Thomson | 10th Apr 2018
1.) The buoys in the approach (1 X SHM and 1 X PHM) were swepped away several years ago and it is planned to replace them with a sector light

3) Prices will increase for 2018; not yet promulgated.
Sutherland/Caithness
Written by Don Thomson | 4th Apr 2017
For Mathew. Strictly speaking Helmsdale was part of the Sutherland Estates. They are now lumped together as Caithness and Sutherland and Easter Ross. Helmsdale is claimed by both the Sutherland and the Caithness websites! I'm not taking sides!!
UP DATE MARCH 2017
Written by Don Thomson | 28th Mar 2017
By Don T March 2017. I've just talked to the HM here reference the buoyage outside Helmsdale. He tells me that he is still waiting for Lochinver to send a boat to replace the Red Can buoy but not only that, the Green one is now on the beach. So no buoyage outside Helmsdale
1 of 1 people found this helpful
Red Lateral MarkMissing
Written by Matthew West | 1st Jun 2016
As of at least 1st June 2016 the red lateral mark mentioned is missing. I recommend making sure you have identified the transit to enter the harbour at the green lateral mark if entering around low water as the channel is very narrow.
1 of 1 people found this helpful
Sutherland or Caithness?
Written by Matthew West | 31st May 2016
According to the local museum, Helmsdale is in Sutherland rather than Caithness.
Update Spring 2016
Written by dononshytalk | 5th Apr 2016
These notes were reviewed by Don in April 2016. They dredged a couple of years ago but it is silting up again so it's still shallow at the visitors pontoon at LWS. The prices have not yet been posted by the HC but I am told they will remain the same as last year.
Silting up at Helmsdale
Written by Orksail | 19th Jun 2013
Additional silt has been deposited over the winter. Our 4ft draught boat needed 8ft showing on the harbour gauge before we could leave. I suggest most yachts should treat this as a 'half-tide' harbour
1 of 1 people found this helpful 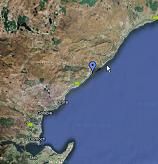