Marina Information (use the

Ardrossan is a ferry port and railway terminal.... ... read more

There are various dangers in the approach that are best seen on the chart. ... read more

Have your say
7 comments
UPDATE AUGUST 2022
Written by Don Thomson 3 | 6th Sep 2022
I reviewed these notes early in the summer of 22. Prices have changed a bit but the only other change is that their video of the approach to the harbour is a bit wonky at the moment
Update Early Summer 2021
Written by Don Thomson 3 | 14th Jun 2021
I reviewed these notes in June 2021. Prices have been held from last year and I've added some infor about restaurants and Bars.
1 of 1 people found this helpful
Update Spring 2019
Written by Don Thomson 3 | 30th Apr 2019
These notes were reviewed in April 2019. The threat of the closure of the ferry to Arran is now a thing of the past. The prices have changed a bit and I've added a link to a video of the approach to the Clyde Marina. New charts are being posted.
UPDATE APRIL 2017
Written by Don Thomson | 4th Apr 2017
These notes were reviewed by Don in April 2017. The future of the Ferry link from Ardrossan to Brodick is still under review but, as far as we can tell they will continue to operate from Ardrossan this summer. The marina has increased its price to £2.80 per metre per night.
Update 2015
Written by dononshytalk | 16th Mar 2015
These notes were reviewed by Don in March 2015. Having maintained visitor rates for 2014 they have increased them slightly for 2015. There is an addition to the facilities in that they now have a rigger on site.
Update 2013
Written by dononshytalk | 27th Feb 2013
The notes for Ardrossan were updated by Don T on the 27th February 2013. No changes but prices have been adjusted for the 2013 summer season
A excellent harbour with very helpful staff
Written by Miura | 20th Apr 2011
I wintered my yacht here on the hard. They did some work including fitting a folding prop. The wrong blades were ordered (my fault!) and this was apparent on relaunch when she went in the wrong direction! She was immediately lifted out again, the mechanic summoned and the old prop refitted - all at very reasonable cost. We were leaving for Ireland the next day so couldn't wait for new blades. The staff went out of their way to get me sorted as the gearbox apparently couldn't take prolonged thrust in the wrong direction.
The facilities are absolutely excellent and Cecchini's restaurant beside the marina is superb & reasonably priced. There is a large Asda nearby and the train station with links to Glasgow & Prestwick is a 2 minute walk.
On the downside, the town of Ardrossan is a bit grim and on the Friday night we had a few drunken local youths throwing their beer cans over the fence toward the yachts. However, this was probably an isolated incident.
The view of Arran with snow-capped mountains as we left for Bangor the next morning was superb.
I would winter here again and visit if cruising the Clyde.
6 of 6 people found this helpful 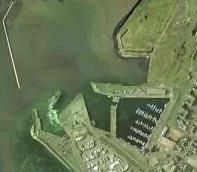