There is a raft of regulations and you should consult their Skippers Guide. The main points are the 4knot speed limit, requirement for £1million third party insurance and be prepared for a random safety inspection the basic requirement of which is that they don’t want you sinking or catching fire in the canal (you do not need a Safety Certificate for a transit licence). There are other rules regarding waste, pets, swimming, use of radar etc. Some of these are in the “Advice, Rules & Regulations” section of the Skippers Guide but others (like the speed limit!) are scattered throughout that guide.

Ardrishaig The Knows 2 miles SE of Ardrishaig and Gulnare Rock with Sgeir Sgalag and Duncuan Island half a mile SE.
Crinan Black Rock 2 cables North of the Sea Lock. Also, if they are locking down when you are approaching the Sea Locks (especially if intending to tie up to the pontoon outside the Ardrishaig sea lock) be aware of strong currents in the vicinity of the gates and the pontoon

There are anchorages in the bays to the SW of the Crinan Sea lock and..... ... read more

Have your say
9 comments
Update Early Summer 2021
Written by Don Thomson 3 | 24th Jun 2021
I reviewed these notes in June 2021. New price for transit not yet uploaded to the Scottish Canals website. We have given a link to a list of skippers available to give an assisted passage.(about £60) .But if you are comfortable with the canal and can manage on your own without delaying others, single handed passage is still permitted - but it will take a wee while. They have rebuilt locks 1 to 4 at Ardrishaig and the finishing work is still in progress so expect to take a little longer getting through there (about an hour)
Ardrishaig Jun 19
Written by FrogVela | 2nd Jul 2019
There is no visitor pontoon anymore. I arrived too late to get through into the basin at5pm. I tied up in the sea lock which was noisy but sheltered. Getting into the sea lock was interesting as there area few boats moored in the basin in front of it. You have to weave your way in and I grounded once on a patch of soft mud before trying an alternative route!
Update Spring 2019
Written by Don Thomson 3 | 7th May 2019
These notes were reviewed in May 2019. A link to this year's prices and Skippers Guide has been updated. Note that, this year, they have started charging £4.50 for hard copy of the guide (at least, they say they are - I already have reports of it being issued free of charge!) If this summer turns out as dry as last year's, expect closures and restrictions on passages.
UPDATE APRIL 2017
Written by Don Thomson | 6th Apr 2017
These notes were reviewed by Don in April 2017. Having transited this canal last summer I can vouch for the fact that only the price has change, downwards, and that you need a crew to do this unless you can piggyback on a willing boat with enough crew to compensate for your lack!
Crinan 2016
Written by Summer Lightning | 3rd Jul 2016
The Yotspot assistance is worth every penny of £60 if you are short handed or new to the Crinan. We transisted over 4 days and simply booked them by phone. 01546 602777. They have a website - theyotspot.com. Good restaurant at the Ardrashaig end of the canal. Cost for a licence for a 37 ft yacht 2016 was £131 Note that because of the dry Spring the water levels are low and it is taking time to fill the locks with water, no problem so long as you are not in a rush.
1 of 1 people found this helpful
Update 2016
Written by dononshytalk | 16th Jun 2016
Due to the storm of protest at the hike in prices to fund the extra manning at the locks they have had to return to the previous modus operandi and lower the prices. This means that if you require assisted passage due to short handed or disability you will have to contact a contractor called "The Yacht Spot" who will provide an assistant for not more than £60. If short handed do not prematurely opt for an assistant - you will probably be able to piggy back one of the other yachts going through. The Yacht Spot is a new venture which has a store with a selection of the more obvious chandlery bits and bobs, it also does Gas and Gaz and has a restaurant open until 10pm.
1 of 1 people found this helpful
June 2015 update
Written by Heretic | 15th Jun 2015
Good passage through on 8th June with just 2 on board and one other boat, also with 2. Staff at each lock, no need to go ashore. Facilities now excellent.
Update 2015
Written by dononshytalk | 19th Mar 2015
These notes were reviewed by Don in March 2015. The price of a transit licence has gone up by 50% to pay for the new staff manning all the locks; it will be £15.95 per metre from May.
The other main improvement is the provision of a new amenities building at the Crinan basin containing showers and toilets for the sole use of those holding a canal licence.
1 of 1 people found this helpful
No more Assisted Passage
Written by JulesHoult | 7th Aug 2014
This scheme is not operating this year although they claim to be reviewing this decision regularly and there is a survey on their website to encourage them.

I went through singlehanded earlier this month - arrived at Ardrishaig just in time to get through the sea lock and asked for a pilot for the next morning - Hugh and Jim arrived at 0830 and I was through in 5 hours! 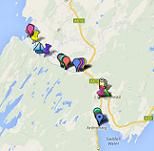