Your Comments: 13 Read or add your comments

Entering from the north leave Maiden Island to Port unless you are VERY familiar with the other side of Maiden Island. Kerrera Sound itself is well charted and the few hazards well marked – the buoyage is flooding North.

The approach from either the South or the North (and the Sound of Mull) is uncomplicated and well buoyed. ... read more

You are spoilt for choice here and it depends on what you need. ... read more

Have your say
13 comments
North Pier Transit Pontoons
Written by Northern Way | 24th Jul 2018
At least that is what they are called to avoid the council actually stating that they operate a marina.
However to you and me marina it is and a great facility with a max stay of 3 nights but saves a lot of humphing of those Tesco bags.
One major failing is the layout of service bollards and the excess of 32amp sockets for which the normal yacht would not have a matching plug so some have to go without.
So for 2018 if you want to be gaurenteed shore power bring a 32amp adaptor
4 of 4 people found this helpful
Oban Marina - Kerrera
Written by Eclipse II | 8th Jun 2017
Spent some time there in May 2017. Great change to the place, the new owners and managers are really making a go if it. The Waypoint is re-open as is the bar. Additional water tanks and fuel is now available. The new team are mainly ex- Clipper race skipper & crew who know the needs of yachting people and they live on the island. They couldn't have been more helpful and friendly. Facilities are all new 1 pound coin only. They have ambitious plans for improving and modernising and I believe they will succeed.
Definitely back on my port of call list.
1 of 1 people found this helpful
update May 2017
Written by Don Thomson | 31st May 2017
The new council pontoons are now under construction and the whole complex will be operating by the end of July this year. See our navigation gallery for a plan of their layout
UPDATE APRIL 2017
Written by Don Thomson | 12th Apr 2017
I have reviewed these notes and made alterations to cover the new ownership of the marina and the installation of transit pontoons by the pier. I have talked extensively with the new owner who is throwing everything he has into this to make it successful. He has just about cracked the diesel supply and has managed to overcome the difficulties of resupply of that. He's charging £2.50 pmpn plus extra for shore power(cards)
1 of 1 people found this helpful
UP DATE MARCH 2017
Written by Don Thomson | 3rd Mar 2017
I have learnt that the Marina has finally been sold. Have a look at the link in our introduction for their news page.
Good news indeed
Still a handy stop off
Written by Nick Kelly | 16th Jul 2016
Some recent negative reviews have seemed a bit harsh.

Yes the ferry service is curtailed, I understand because of staff shortages, and you do have to book each trip. However the pontoons are good, the location handy, the wifi excellent to the pontoons, the laundry facilities good and there is a nice little bar still open in the evening.

Just stayed here for a four night stay and enjoyed it. It is undoubtedly a bit rough and ready at the moment, and could do with some investment.

Depends on what you are after, I guess.

Nice walks on Kerrera.
1 of 1 people found this helpful
Marina Only as a last resort! Expensive No Fuel water not drinkable.
Written by rodrinn | 11th Jul 2016
On round Britain trip starting from South Coast. This was first marina entered in Scotland. I hope they are not all like this. Marinas in England, Wales and Northern Ireland, I entered, were all well run and efficient.
Fuel no longer available.
£19 a night for a mooring, ensure you do not pick 50 ton mooring as they will then charge you £50 per night.
The mooring gets you a mooring and somewhere for rubbish, expect to pay for all else including showers.
The mooring field now means there is very little room to anchor.
Notices in showers say be careful not to swallow any water or use it for washing food or making ice.
The water taxi runs 4 times a day 9, 11, 13 and 17:00. There is not much of anything unless you take the water taxi.
First task for any new owner will be customer service training for staff. It felt like they were doing me a favour, and was an unpleasant experience.
Marina must be haemorrhaging goodwill at the moment.
1 of 1 people found this helpful
Oban facilities
Written by Summer Lightning | 3rd Jul 2016
Oban marina does not have fuel for sale (since 2014) despite the pilot books telling you differently. We were also surprised to find that the only place to eat had shut down. The staff are trying hard to run a place that is clearly not receiving any investment.
1 of 1 people found this helpful
Further update June 2016
Written by dononshytalk | 9th Jun 2016
We have discovered that Oban Marina is up for sale which is why it is running down. Do not expect a big welcome until a new proprietor is found - everything is there but from nine to five only and the water taxi runs every two hours between 0900 and 1700. If you book in advance they can lay on a return trip to the Marina at 2000. All told a bit of a shame - anyone want to buy a marina?????
1 of 1 people found this helpful
Update 2016
Written by dononshytalk | 9th Jun 2016
Arrived at 1650 as they were packing up for the day. They saw me coming and rushed off!! Discovered from another visiting boat that that was it for the night, no restaurant, no electric, no interest, next water taxi 0900 tomorrow and only running every two hours. No wonder the place was next to empty. Left and picked up a visitors buoy on the other side - disgusted.
1 of 1 people found this helpful 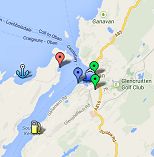