Very strong tidal flows (up to 8knts), cross sets, uneven bottom raises rough seas, assorted rocks. Ebb against wind can produce dangerous seas up to 1 mile off. Once in watch out for the ferry, danger of being set down on it.

This article deals specifically with the tricky entrance to and exit from Strangford Lough, plus facilities available just within the entrance at Portaferry and Strangford.    The interior of Strangford Lough and the cruising delights within are dealt with in another article to be found HERE (opens in a new tab) ... read more

Timing is everything when dealing with the entrance to Strangford Lough, and you will need a decent chart of the entrance showing the transits.  Exit needs special care as with the ebb tide under you there will be a point of no return, where the mariner will have no option but to face possibly rough water, standing waves and overfalls. ... read more

There are two available stop off points as one transits the narrows which, as we have said, is best done at slack tide or early in the flood. Considerable care must be taken when turning into either of these when the tide is running or you run the risk of being swept past on the tide. ... read more

Have your say
8 comments
UPDATE SUMMER 2021
Written by Don Thomson 3 | 19th Jul 2021
There are new prices for the Portaferry Marina otherwise no changes
Update 2019
Written by Don Thomson 3 | 5th Jul 2019
These notes were reviewed in July 2019. No changes were made, not even the prices!!
UPDATE APRIL 2017
Written by Don Thomson | 18th Apr 2017
I reviewed these notes in April 2017. I've only had to change the prices.
Entering Portaferry Marina
Written by Taff | 4th Jul 2015
The flood flows strongly into the Marina. If you enter with it, be sure you can either stop at the pontoons facing you, or else go around the end of the finger, and turn into the tide to berth. Some might reverse in. We entered at slack the first time, and against the ebb afterwards. Helpful staff and a lovely area.
1 of 1 people found this helpful
Update 2015
Written by dononshytalk | 22nd Apr 2015
These notes were reviewed by Don in April 2015. The addition of the new pontoon in Strangford harbour has been noted in the text.
NEW PONTOON IN STRANGFORD HARBOUR
Written by cuillin | 3rd Jun 2014
There is a relatively new, and substantial, Pontoon built on to the north side of Strangford Quay to facilitate visiting boats. A lovely location. It can accomodate a number of boats (I estimate it about 80ft long). Just follow the sailing directions to the Quay, and you will spot it easily. Fee to be paid at Cuan Restaurant. and access code given there. The pontoon can be seen in the Overhead view of the Narrows, on this site.
TIDAL FLOW INSIDE PORTAFERRY MARINA
Written by cuillin | 3rd Jun 2014
Visitors should be aware that the tide in The Narrows can flow quite strongly through the Marina, under the pontoons. This should be taken into account when berthing and deciding whether to berth port or starboard side-to. The tide can quickly push the bow away when coming into the pontoon - so be aware!
1 of 1 people found this helpful
Update November 2013
Written by dononshytalk | 25th Nov 2013
Updated November 2103 by Don Thomson. Apart from the addition of some aerial photographs and the removal of one no-longer-active video, no changes were necessary
1 of 1 people found this helpful 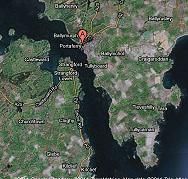