Tunisia: Worth Visiting on Your Med Cruise ?

In early January 2011 Tunisia is making the news for all the wrong reasons. Protesters are clashing with police, people are getting killed and hurt. 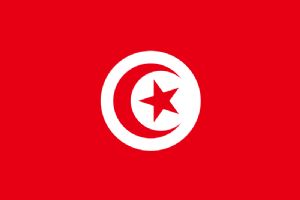 Western news coverage is limited, perhaps because no one pays much attention to this tiny country, or maybe because things are so tightly controlled (to the extent of interfering with people's private e-mails), that information is slow in coming out. Our contacts there tell us there are many more dead than the news lets on and that snipers are involved.

This is a pilotage guide, and the reason we bring up Tunisia now is because we have very real experience of the country as seen from a cruising yachtsman's point of view.
The first thing we need to make clear about Tunisia is that it is our favourite country in the Mediterranean bar none. The thing that makes Tunisia so special for us is without a doubt the people themselves.  By Western standards they are desperately poor, but we have never experienced such hospitality, tolerance, help and kindness in any country we have visited.

Many visitors to Tunisia arriving on a boat find the poverty levels distressing and quickly leave, in particular Americans (who are not widely liked anywhere in the Mediterranean, since Iraq). French are the main visitors followed by Belgians and Germans. A few British boats pass through and some even spend the winter.

To get by in Tunisia a smattering of French will help a lot, they nearly all speak French but without a very pronounced French accent... which means your attempts at schoolboy French will quite often be understood by Tunisians, if not by the French themselves.

So from a boaters point of view what does Tunisia have to offer, is it worth visiting, could it be a potential wintering spot, and what pitfalls are there to watch out for ?

1. Visiting and passing through. 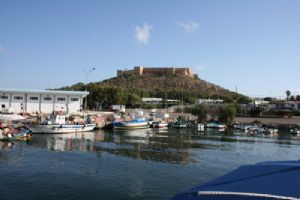 Virtually right on the corner of Cap Bon is Kelibia, a large well protected fishing harbour with one area of quayside set aside for yachts. The disadvantage is the distance to the main town and shops which requires a taxi... before you baulk understand that a taxi fare is cheap (under 50p). Mooring prices are negligible.

To the south of Cap Bon there are proper Marina facilities at Hammamet, Al Kantaoui and Monastir. Marina prices are very cheap by Western standards, but nowhere near as cheap as using the non-Marina fishing harbours, of which there are plenty.

If moving into the western Mediterranean along the Tunisian coast there are Marina facilities at Sidi Bou Said, and although not proper Marinas yachts can be catered for easily at Bizerte and Tabarka near the Algerian border.

Be aware that as soon as you enter Tunisian waters you will be followed and then questioned by large Tunisian Navy patrol vessels.  The radio operators speak English and are polite, but there will be many questions.

The Tunisians are keen on their paperwork, you will be dealing with several branches of officialdom ranging from Customs, Port Police and Garde National. Most foreign visitors, European or American are allowed two or three months to roam freely.

There should be no fees or backhanders to pay for clearance in.  We have experienced attempts by certain officials to ask for "Gifts", which basically means a backhander... only in some places, notably Bizerte.  We have been told by locals never to give them anything.  A well fed and portly Tunisian is a rarity, you will often find those asking for gifts fit this description.

It is easy enough to stock up on the basics in Tunisia, bread, milk, vegetables,eggs, meat, coffee, tea and toiletries are readily available as are many canned goods. In general food prices are very very cheap, for instance a French stick costs about 10p, a kilo of tomatoes about the same.

What you probably won't be able to find are the most basic items of chandlery or anything to do with repairing your boat.  The Tunisians are masters at making things from scratch, mechanical parts can often be repaired or manufactured in a nearby town.  Wooden boat owners will find with very little searching red lead primer, which is used in caulking putty and can't be obtained in Europe.

Trying to import special parts is a nightmare (having direct experience importing a large shipment of epoxy for deck work on a motoryacht)...don't bother. 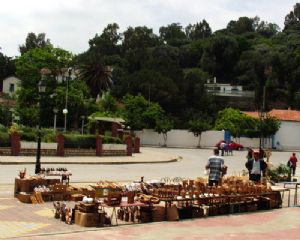 Fuel prices are ridiculously cheap by European standards, the diesel fuel is sulphurous (as is the paraffin), but engines seem to run very well on it.  It's worth stocking up on lubricating oil, especially if your engine prefers a staight grade as opposed to 15/40.

Local beer, Celtia, and local wines can be obtained from hidden, separate parts of the local supermarkets.  Nomally discreetly located they may take some tracking down. Most towns don't have visible bars, with the exception of Tabarka...where a Saturday night out can resemble rougher parts of the UK, with tables flying, shoving matches, bouncers and Police.

The main marinas all have boatyards with travel hoists, Hammamet less cheap, Monastir very cheap, run by a delightful man who will carefully haul your boat, his young  minions will clean and scrape it then apply the ridiculously cheap local antifouling...good for 1 year.

The ease of getting your boat hauled in fishing harbours varies and is sometimes not straightforwards, involving scams like having to purchase special insurance.  Getting labour to help with your boat work is easy enough, they will need close supervision but in our experience Tunisians are the hardest workers in the whole Mediterranean. They just need guidance, particularly in health and safety matters.

Beware of local "Mr Fixits" who quote an all in price to work on your boat.  By far the best plan is to employ them by the day and pay in cash daily. 20 Dinars per day was in 2008 an exceptionally high figure for a skilled worker... that comes out at about £8 !!!  Unskilled or young workers can often be got for half the price.
Conclusion:

Certainly in our opinion if you are passing Tunisia it is well worth stopping. After the greed and moneygrabbing in European marinas you will find Tunisia very refreshing and perhaps the most foreign place you're likely to visit the Med.

Remember it's not Europe, it's Africa. Dangerous animals like wild pigs (that actually look something like a werewolf), and wolves roam the forests...yes it's not a desert.

The people are generally hard-working, happy, innocent and likeable. The fact that they live in a virtual police state doesn't seem to have bothered them too much up to now.  Certainly when we were last there it was extremely common to go into shops or ride in cabs where the picture of President Ben Ali was prominently displayed benevolently smiling at the customers.

In fact his picture seems to appear in all public places, and we developed this kooky theory that instead of CCTV (as deployed Orwellian style in the UK), the fact that the President was watching everyone... all the time... prevented crime. There is very very little crime in Tunisia.

Our best wishes and hopes for a peaceful resolution to the troubles in Tunisia go out to all our friends there, and if you are knocking around the Med on your own boat and make a point of going there, we can personally recommend Tabarka and Monastir.  Once you become a local "Face" and not just a "Tourist" you will find the people lovely, esp if you learn a few words of Arabic...like "Hondula !" (Fantastic, great !). They are not hot heads or fundamentalists, you will see more burkas in the UK than Tunisia..in fact it's forbidden for them to wear it in schools or work. From what we've seen in Tunisia, Islam is a good religon, with generosity to visitors high on the list.  The trust and business ethics of devout Muslim store keepers is eye opening.

Negative points are the begging by healthy young kids who are just trying it on, shoo them away firmly.  There are many old people begging who really do need, and giving them a Dinar (50p) once in a while won't be forgotten, nor will kindness like donating old clothes. Word gets around small towns, in one the thoughtful Chief of Police was well aware that we were looking out for several older folk and tramps and commended us. Lovely people, very human.

Visit Tunisia and you'll see the world differently afterwards.  We did just that, spent over 2 years in large chunks onboard, worked there too, ...loved it.

Living on Board in Spain...Be Warned !
Cruising the Med, living onboard ... Is it all it's cracked up to be ? Is it for you ?
Learning to Develop Your Sixth Sense, Listen to Your Boat
Choosing a Blue Water Sailing Vessel
Three Tips for Moving Onto a Boat
Small Petrol Generators on Boats ?
© visitMyHarbour.com | website design created by Black Culm Ltd