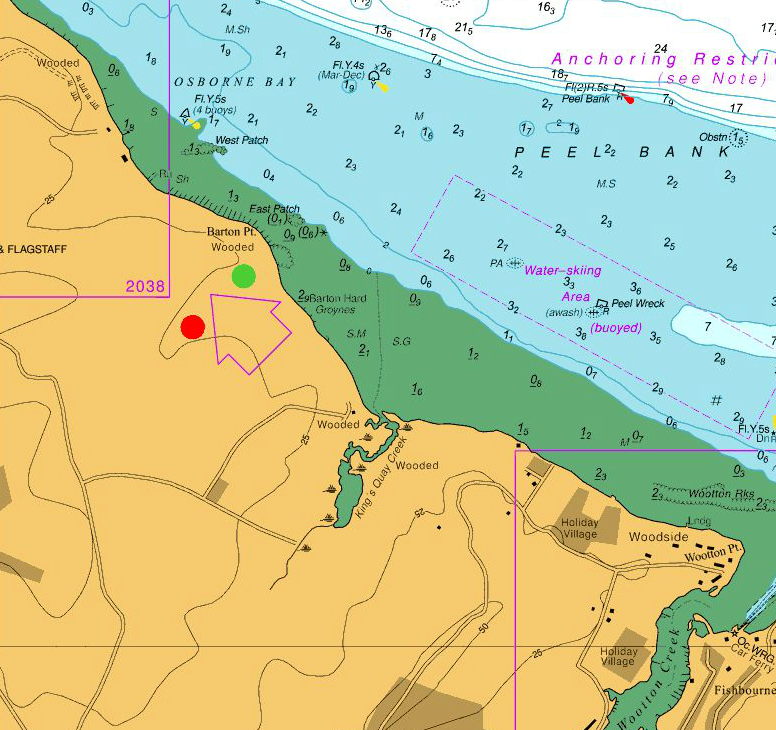 About 5 years ago Practical Boat Owner published an article on secret (little used) anchorages around the Solent and one that was featured was Kings Quay.  This lies between Wootton Creek and Cowes on the Isle of Wight and looked very appealing, a pool a couple of hundred metres inland surrounded by trees. 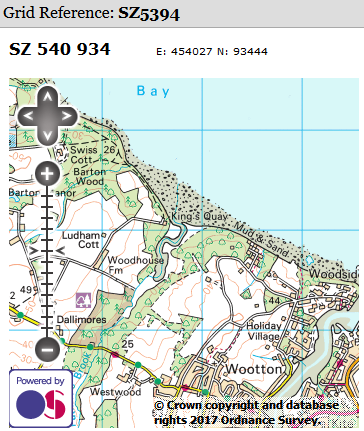 It was only accessible at high tide via a rather winding entrance channel and landing wasn’t permitted.
The year after the article was published I tried the entrance on a rising tide and got most of the way in when I discovered that the actual entrance to the pool was blocked by scaffold poles, (see photo).


The channel is narrow and my Macwester Wight at 10 metres was almost that width so I got a few chips out of the keel and the prop had a lump out of it too, (the channel is gravel). 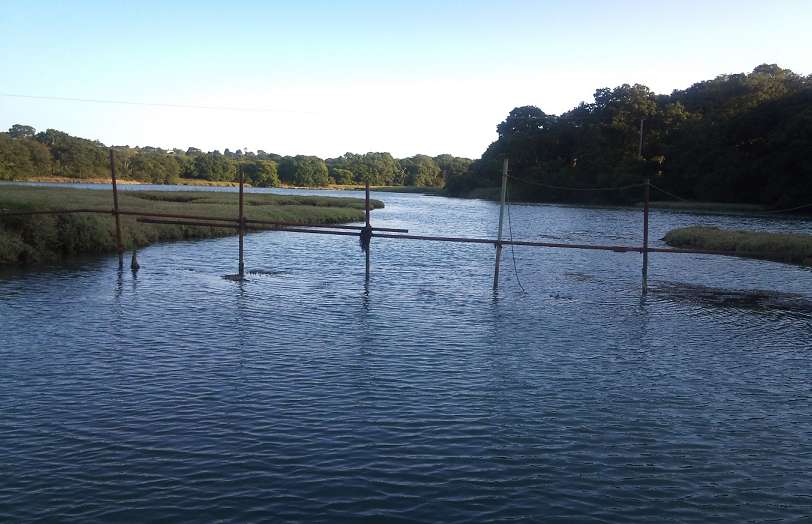 .
I tried ringing the IOW Council, Harbour Masters and a few others finally speaking to Gus Lewis at the RYA who was really helpful and sympathetic and he did some research but was somewhat ‘stonewalled’.

I believe the land surrounding the inland bay is privately owned but the route in is controlled by English Nature and is for bird nesting and there are signs up saying ‘no landing’.  Apparently they told him that if he could find out who put the obstruction up, they could get it taken down, hardly fair, try putting up an obstruction in any other harbour and see how long it stays there!

It seems to me that it’s a navigable tidal water way and as such should be free to use and anchoring in the pool should be OK as long as you don’t land.

This seems to be another of our freedoms taken away, if it was a blocked public footpath there are ways of complaining and getting it re-opened but I don’t know the process in this case.

If anyone has any information about this or can help, please volunteer, it would be a really nice anchorage on a warm summer night.

I am hesitant to contradict you, but there is as far as I know only an absolute right of navigation in tidal waters where the bed of the tidal water is either owned by the Crown or a declared navigable river or channel.

The creek in question was declared a site of Special Scientific Interest in 2011.

QUOTE
In addition to the MCZs, which have been recommended for most of the Island Coast, there are six small Reference Areas in which anchoring, fishing, dumping, the removal of living animals, seaweed and the like, would be forbidden. The recommended ‘Reference Areas’ around the coastal areas of the Island are at Alum Bay, Newtown Creek, Kings Quay QUOTE

I am surprised that the IOW Council had no knowledge as it is well documented that a barrier has been erected to prevent marine craft entering - following its designation as a PDZ and SSSI.

The Creek from the MLWM is privately owned and there is therefore no absolute right of navigation.

I read your article on Kings Quay Creek with interest.  It refers to the temporary scaffolding construction that has been placed along the river inside the creek, intended to obstruct craft.

Your contributor Keith Calton is right that navigation in tidal waterways is a public right.  Full stop.  This is established since Magna Carta and could only be restricted by statute.  No such statute has been passed by Parliament.

The response above is a bit misleading.  First, he writes 'there is as far as I know only an absolute right of navigation in tidal waters where the bed of the tidal water is either owned by the Crown or a declared navigable river or channel'. This is just plan incorrect.

Secondly it is mentioned that King's Quay Creek is a Site of Special Scientific Interest and also having been proposed as a MCZ.  Neither of these is relevant to the right of navigation, which still exists there.  Nor does the fact that the surrounding land is private affect the right of navigation in the creek: only the right to land there.

Under our Common Law, you just can’t restrict the rights of the citizen.  The barrier is an obstruction of a publicly navigable river, and such an obstruction is a public nuisance at common law.

Some details are under navigation in tidal rivers here: http://nabo.org.uk/files/members/right_of_nav.pdf

"Regarding Kings Quay Creek; having today 15.04.2019 spoken with a local resident it appears that a local landowner has been obstructive for a number of years in deterring lawful access to the tidal waters, thus the unlawful erection of the barrier. The creek is bordered by different landowners, it is only one in particular the has taken it upon themselves to erect this barrier. The law is quite clear regarding tidal waters as so correctly stated by Christopher Barker.

"Further to my report 15th April 2019 I note that a new barrier of wooden post and rail fencing has been erected across the entrance to Kings Quay Creek. Notice to remove the barrier as a public nuisance has now been given and attached to the barrier."

Seasickness.. this has worked in chronic cases
Cruising on the West Coast of Scotland
From Dublin to Bangor and back with the tide all the way !
Buying A Sailing Yacht Unseen - Our Journey From Eastbourne To Ramsgate (Part 2)
Buying A Sailing Yacht Unseen - Collection and Sail From Cowes To Eastbourne (Part 1)
Weather Forecasting in UK Waters, Using Barometer Readings and Local Observations
The Weather at Sea, Explanations plus the Beaufort Scale
Chart Navigation Tips - Do Your Know These Five Danger Symbol Secrets?
Know the Wind - What is True, What is Apparent
Chart Navigation Made Easy - Five Tips to Make Sailing Navigation Fun!
Sailing Navigation Secrets - Do You Know Your Sailing Right-of-Way Rules?
Sailing Navigation Secrets - Seven Nautical GPS Alarm Tips You Need to Know
Coastal Navigation, How to Double the Angle on the Bow
Crossing a Bar- 9 Rules to Keep You, Your Crew , and Your Boat Safe