You should not plan to come in here in winds above F4 from the North..... ... read more

There are four visitors’ buoys in the trots beyond the Boat Yard pontoon........ ... read more

Have your say
5 comments
Update June 2022
Written by Don Thomson 3 | 23rd Jun 2022
I reviewed these notes and had a chat with the Findhorn Pilot about the inbound channel (which basically still follows the advice in their 2018 article by George.) Findhorn Week is one of the things I will miss now I'm on the beach having spent many weeks there as a guest on Shy Talk.
UPDATE SPRING 2021
Written by Don Thomson 3 | 20th May 2021
I reviewed these notes in May 2021. I see that one of the RFYC members has added a navigation page on the Club's website so I've put in a link to that. You can rely on what he writes because he's been in and out of Findhorn in many different boats for years and the aerial shots were taken by him from his own plane.
Unofficial HM is very helpful but entrance to estuary requires concentration!
Written by Mark Harbour Master Sailing Challenge | 23rd Feb 2021
Sep 2020. Findhorn is more of an estuary than a harbour. It is very pretty and well worth visiting. Lots of places to anchor or use the two visitor moorings halfway along the N/S trot of private mooring buoys.
Derek Munro is the Chair of the Fairway Committee ( findhornfairway. co. uk / index.php ) and the unofficial Harbour Master and the best person to contact for the visitor moorings. 01309 690802. He will also give you directions across the bar and tell you the state of the marker buoys which are normally set to mark the shifting channels. THESE CHANGE AND NEED CHECKING.
There is a small marina at the northern end of the north - south channel parallel to the village. I did not visit it.
The older drying harbour further south has two small E/W piers and is in front of the clubhouse of the Royal Findhorn Yacht Club.
The currents are very strong and you will find the sandbanks close to your mooring at low water, but the birdlife is amazing and there are some lovely food shops in the village. morayfirth-partnership . org / findhorn-marina/
I strongly recommend visiting Findhorn and anchoring in the estuary - and get up early to see the sunrise - it is beautiful.
UPDATE SPRING 2018
Written by Don Thomson | 3rd May 2018
The basics haven't changed and the channel into the bay is the same as last year. Just note that they have removed the Landfall Buoy
Update Spring 2016
Written by dononshytalk | 4th Apr 2016
These notes were reviewed by Don in April 2016. The channel hasn't altered markedly so we've left the 2012 notes in. 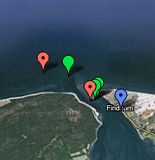