AC 1954-0 Cape Wrath to the Pentland Firth including the Orkneys; AC 2076-0 Loch Eriboll (no large scale chart of Loch Eriboll)

The tidal streams off both Faraid Head and Whiten head can produce confused seas even in settled weather.

Loch Eriboll is a popular stopping off point for those intending to, or who have just managed to, weather Cape Wrath ... read more

There is a small privately owned harbour at Rispond Bay which should not be used without the owner’s permission.... ... read more

Have your say
7 comments
Anchor - feedback
Written by David Leslie | 26th Nov 2021
We tried to anchor South of Ard Neackie in September 2021, but struggled to find holding due to thick weed.

Shifted up to the other side at Bagh Loch Sian, and got perfect holding just South of the beach there. Beautiful Loch.
UPDATE SPRING 2021
Written by Don Thomson 3 | 27th May 2021
I reviewed these notes in May 2021. As far as I can tell nothing has changed here. I have seen several reports (as well as those from members below) of very strong conditions here due to the funnelling from the South West. Just about everyone of them says "Should have laid more anchors"; on the other hand they survived to tell the tale - and when anchoring in Gale to Severe Gale conditions that is good.
Straightforward entrance and good lobsters delivered to your boat!
Written by Mark Harbour Master Sailing Challenge | 2nd Mar 2021
August 2020. Circumnavigating clockwise from Kinlochbirvie, Loch Eriboll is an obvious safe haven. We tucked just south of Ard Neackie peninsular by the lime kilns. A very friendly fisherman who we called up on VHF was happy to deliver us a couple of lobsters to our anchored boat after advising us where to drop it! It is very picturesque with the N500 driving route nearby.
You do feel you are in a safe anchorage but I guess in a gale you would be quite exposed.
Sailing east from here, you witness the landscape changing from wild west to arable east in a remarkably short distance.
UPDATE SPRING 2018
Written by Don Thomson | 12th Apr 2018
There's nothing to add here. The funnelling effect of the glen down into the loch at the southern end can be severe. I'm updating the charts.
Gale force anchorage
Written by Bryant | 2nd Oct 2017
Hello. I have been a member for a while and have used your site a lot since starting a cruise around Britain in April this year. The info is first class and I would just like to let you know about my experience in Loch Eriboll just over a month ago.

My route from Essex was clockwise so I made the jump to Loch Eriboll from Stornoway. There had been a few gales which kept me in Stornoway for two weeks but a 5 day weather window presented itself so I headed out. When I was about 15 miles from Cape Wrath Stornoway coastguard issued a warning of a southerly gale 8 'soon', the possibility of which didn't appear on any forecast previously.

Being too late and the wrong wind direction to turn back I continued as planned into Loch Eriboll where I anchored right up at the head of the loch on the east side off the small house / sheepfold. I anchored in +/- 20 feet of water and let 160 feet of scope out and went to bed only to be woken at 5am by the howling wind.

The direction was southerly and although I was anchored as best as I could be behind the mountain, the way the wind funnels into the loch there really wasn't any shelter from the wind although swell was no problem being so close up to the head of the loch. I had the best part of 24 hours of nail biting with a many recorded gusts at deck level of over 50 knots and sustained winds of 35 to 45 knots. I am pleased to say that my only drama was having to right the capsized dinghy which I should have got on the davits the previous night. The holding proved to be excellent. I did move slightly, according to my drag queen app, about 20 feet but the bottom is mud and all the anchor did was dig in deeper. So deep in fact that it took me half an hour to motor it out before I left.I underestimated the lack of shelter afforded in the loch and in the same situation again I would row out a second anchor as suggested on your web page for Loch Eriboll.

I can also confirm that, again as mentioned on your web page, communications in the lock are challenging or more accurately, for me, impossible. I use EE and had no suggestion of a signal. I did not receive a navtex forecast whilst in there and nor could I pick up any of the coastguard issued shipping forecast on my VHF and nor was there any fm /mw radio reception so it certainly does feel isolated and 'off the radar'. The only equipment I had onboard to give me any suggestion of the weather was the trusty barometer!

Anyway, I thought it would be useful to relay this experience because despite the lack of shelter from the gale, the holding couldn't be faulted. Fyi info there is an video of some of the gale entitled 'The Rocna, my hero' under the 'Other bits' section of my blog that can be found under

1 of 1 people found this helpful
Update Spring 2016
Written by dononshytalk | 5th Apr 2016
These notes were reviewed by Don in April 2016. No changes were made.
Fantastic Loch to visit, spend a day or two and have a look round.
Written by Barbados Billy | 25th Jun 2014
I was intending just to stop for fair tide and round Cape Wrath to the west. I chose to anchor on the south side of Ard Neakie where a narrow isthmus leads to a sheltering island. There are plenty more places to drop the hook, according to the weather. During the night there were a few strong gusts from the hills. Some appeared to have snow on them but it could have been weird light. There is a disused quarry on the island and some old (lime?) kilns and a gaggle of rusting stationary engines. Some extraordinary sea caves nearer the entrance to the loch provided more than a little excitement. When you are rested you can face the cape, just round the corner! No problem.
1 of 1 people found this helpful 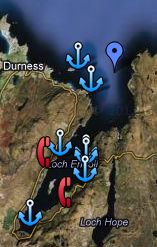