Reefs and rocks close to the NE of the approach.

This is a very popular little harbour between Wick and Helmsdale (bit closer to Wick by a couple of miles) and if you are not in a hurry makes a pleasant stopping point on a cruise around the Moray Firth.  The harbour has been developed over the centuries and, of course, was a busy place during the fishing boom. It is interesting to note that the railway didn’t arrive here until very late in the nineteenth century so, to a certain, extent they missed the boat and most of the harbour’s  distribution was of cured fish via the North Sea to the Baltic and Europe as overland communication from here, pre steam, was horse and cart.

The village is divided into Upper Lybster and Lower Lybster (the harbour). The upper village is a ribbon development along either side of the road to the harbour from the coast road.  The road down to the harbour (or up, from depending on where you start!) is steep and windy affording a good view of the harbour and at one point crosses a venerable bridge over a picturesque glen and waterfall. The harbour is, sort of, off the beaten track unless you are looking for it, especially from the land; and from the sea, if it weren’t for its prominent light house, you’d miss it altogether along with the other little harbours in the coves along this coast.

Anyway, for some reason the local Laird (a Captain Sinclair) decided to develop Lybster and the layout of the village on the cliffs is still as he designed it. By 1845 (only a hundred years after Culloden) the harbour was home to a couple of hundred boats and was booming; it is hard to imagine what it would have been like; the population grew to over three thousand, all of them employed in the catching, curing, and export of herring; there were fishermen, coopers, gutters, smokers, curers and countless labourers who by 1859 supported a fleet of over 350 boats.

There was a problem though, Lybster was very vulnerable to the vicious storms which pound these latitudes during the winter and the harbour was wrecked several times, each time being rebuilt even stronger until no one (including the Government) would fund it any more.  That, and the failure of the railway to cash in on the boom here, meant that Lybster was one of the first ports to suffer from the decline in the fisheries; it never had steam winches etc for offloading catches and was narrow in access and was on its way out even before the railway was on its way in!!

You can imagine what it was like approaching low tide with a couple of hundred boats all trying to get in and find somewhere convenient to land their catch; it must have been bedlam so it is unsurprising that the fishermen started to move to larger harbours.

There were attempts to revive it after the First World War but these failed; the inner harbour wasn’t built until the 1950s and, although it struggles on, it’s a brute of a place to get to by road transport so the fishing is back to what it was centuries ago, albeit served by power boats instead of rowing skiffs, but it’s a bit of potting, long lining and some small beam trawlers.
Of note is the recent development of Waterlines in one of the old warehouses on the harbour. This is a combined museum, café and amenities building and you will have to visit here to get a key to the toilets. It’s a quiet spot frequented by fishermen, yachties and ornithologists in equal measure; the hike up to the village is long and steep so if you are looking for provisions you’ll need your going-ashore trolley

There is a Dylan Winters Keep Turning Left video which includes this harbour. Lybster starts about minute 26

There are no large scale charts of Lybster and even zooming in ....

.... with Sea Clear gives little indication of the orientation of the harbour.  A look at our Google maps link (if you have internet on board) gives one a good idea. Our chartlet is a freehand schematic of the harbour and also will give you some idea of what you are approaching but do not try to use it for navigation, the low water line is especially approximate.

You should approach the harbour from our waypoint on a heading of 350°T; the cliffs on the starboard side are fringed with rocks so if you can see into the harbour on your approach you are too far over to the right.  In good visibility you may be able to make out the leading marks, a couple of rusty scaffold poles with small radar reflectors on top, one situated on the south pierhead beside the light house and one beyond that on the second pier along on the starboard side of the channel and visible over the top of the wall (See the chartlet).

Our photographs of the approach (forgive the poor quality) do not show them because they were not identified during the approach and we were possibly a little left of the ideal course.  In Southerly winds, the seas break around the pierhead but one should still hold that 350°T course until very close to the pier and then jink round it into shelter; in that way you avoid being pushed against the cliffs on the starboard side of the approach. The harbour entrance is impassable in strong SE to SSW winds but well sheltered from the SW through North to ESE. 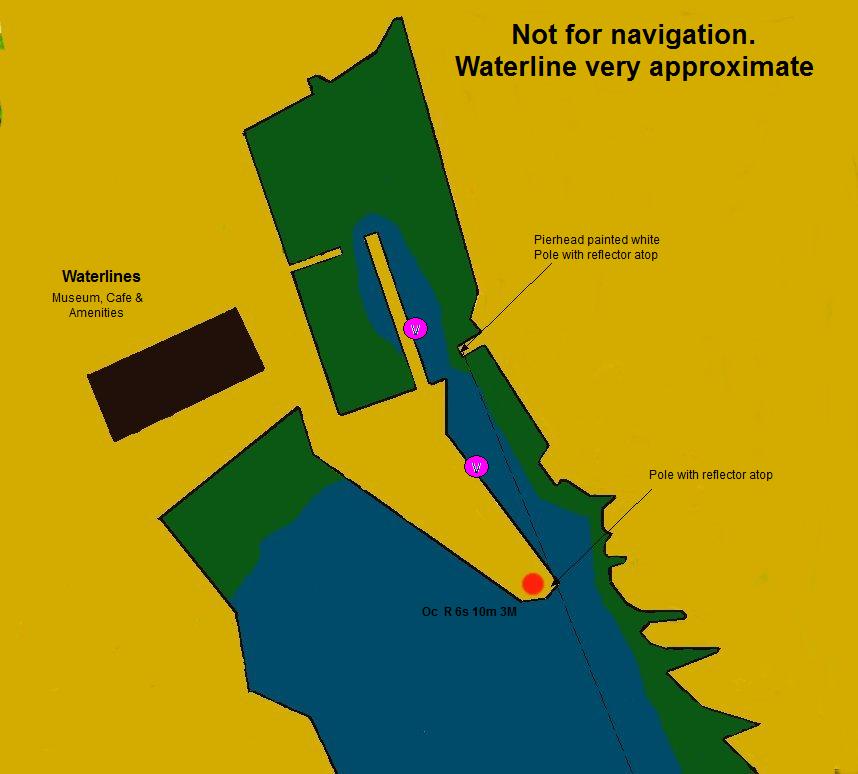 You are unlikely to find a mooring against the wall in the inner harbour....

.... but should adverse winds set in whilst you are here, a bit of negotiation with the local berth holders will secure you a berth alongside one of the FVs. There’s normally plenty of room against the South Wall but be careful of keep creels hanging off the wall.  In certain sea states a bilge keeler may suffer from bilge keel boogey (a condition where the boat rocks metronomically from beam to beam with no apparent sea running) but an angel on one of the breasts ropes will normally cure this.

This is a private harbour and there is no harbour master in regular attendance to allocate space to you; if you find a berth empty in the inner harbour it will have permanent mooring ropes and a piles of creels beside it; don’t tie up there because its owner will be back at the bottom of the tide and will ask you to move.

The harbour dues in 2012 were £15 per night which were collected by the people in the Waterlines café; this fee covered use of the toilets block which housed free showers and laundrette. The free laundrette makes it a very good deal!!

2021.  The Waterlines Cafe is unlkely to open in the 2021 summer season so, at the moment there is no-one to collect Harbour Dues and the shower/toilets are inaccessible.

As has been said there are showers, toilets and a laundrette located in the Waterlines building. Fresh water may be obtained from a tap on the south side of the inner harbour. There is no shore power and, contrary to the information in whatever pilot book or almanac you consult, there is no fuel here, the garage closed several years ago and the nearest fuel is at Wick.

You will find limited provisions in a mini-market in the Upper village and there’s a Post Office, bank and ATM there as well.

Up in the village on the cliffs there are a couple of pubs, a fish and chipper and a restaurant in the upper village but it is not renowned for its night life. At the far end at the junction with the main road is the Portland Arms Hotel/Restaurant which appears to serve good food.

Got a comment to make about Lybster ?  Have you found this coverage helpful ?   HAVE YOUR SAY   (your email address will always be kept private) 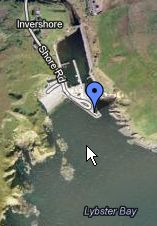