Your Comments: 2 Read or add your comments

Both have rocks along the coast adjacent to the harbour entrance and there are no large scale charts marking their locations. Stay 3 cables off shore until harbour entrances are identified from the NNE

HW is Aberdeen – 1Hour. There is no data for depths but approximately same as Fraserburgh.

Sandhaven is owned and run by a trust which does have a website but we cannot link to it.
There is no resident Harbour Master at Sandhaven but Rosehearty has a part time harbour mistress whose home overlooks the harbour and can be contacted on when she is at home on 01346 571796.

These two harbours are very similar in that they are patched on to the coast (as opposed to being enclosed parts of a bay) and both were very much larger in their heyday. They both have large disused harbour basins on their Eastern sides but unfortunately when the railway arrived in NE Scotland it only came as far as Fraserburgh and almost overnight the herring fleet started to land its catch there and the two small harbours went into a rapid decline and now all that remains at both locations are small, tidal, Western basins.

The large eastern basin of Sandhaven is now well silted up and the seawall is breached leaving a central mass of rubble between that wall and the entrance to what is now the operational harbour here. It is still possible to work ones way into this Eastern basin from the West entrance to the present day harbour and if one keeps fairly close to the few permanent mooring buoys a reasonable short term anchorage can be found for boats that can take the ground.  By following the link below you can see all round the disused harbour (on the right), past the breach in the old seawall (just left of centre) to the harbour entrance and present day harbour on the left. This street view was taken High Water. Our photographs show the disused harbour at low water.

Sandhaven is administered by the Stonehaven and Pitullie Trust which hopes eventually to find funds to improve the Eastern basin but in the meantime struggles to maintain the present structure against the ravages of the NE winter. There is definitely scope here for a marina and, as all the permanent marina berths from the Tay to Inverness have waiting lists, there is a potential market but it would take a vast investment to “marinise” this harbour. It is, however, a delightful little spot and well worth a visit in settled weather.

Rosehearty once consisted of two Ports; Port Rae to the East and the present day harbour to the West. “Port Rae” is full of rocks and care should be taken when making for Rosehearty because the old harbour wall of Port Rae is more visible than Rosehearty. One defining feature is the white lighthouse on the end of the pier at Rosehearty and you shape a course for that from the NNE to avoid the rocks in Port Rae. A feature which does stand out is the old Observation tower built after WWII on the Western side of Rosehearty town to control the Air to Ground weapons range which was closed in 2000 and the Tower was sold off as a private dwelling having the distinct advantage of being “bomb proof” and having bullet proof windows!!

Both harbours have very limited shelter and none at all from the East and North; they can only be entered in settled conditions and if weather is forecast for Northerly/ North Easterly whilst you are there you would be wise to get out and make for either Banff/Macduff or Fraserburgh/Peterhead.

Although there were a fair few shops here in earlier years there is very little here now apart from a couple of shops providing basic supplies.

....by boats which have a shallow draft and, if you want to rest here you need to be able to take the ground.  In both cases you should shape your course from the NNE towards the westerly of the visible pierheads; Rosehearty has an obvious pierhead lighthouse and, when closer in, lead-in marks/lights whereas Sandhaven has no marks or lights but the channel in between the rock outcrops is fairly obvious.

You are unlikely to find an empty berth on the pontoons in Sandhaven but if you enter on the tide and turn to the left around the rocky rubble of the remains of the east wall and make towards the mooring buoys you will find somewhere to dry out.  There are reefs on the shore extending from the end of the central pier to the SE corner of the harbour and there is a perch marking the worst of them.

At Rosehearty the lead-in marks (tall black and white striped poles with lights atop) will bring one safely through the reefs to the end of the pier when you should edge over to starboard of their line to pass parallel to the pier into the inner harbour entrance (beware of the pot buoys on the eastern side of the narrow channel).

In favourable weather you should be able to find a berth alongside the outer pier but would be advised, given the narrowness of the channel to warp your boat round to face seawards when you moor. Otherwise in the inner harbour, as you are unlikely to find an alongside berth, you should be able to find space to anchor fore and aft in the middle. Note that the boats in the inner harbour that do not have alongside berths run long mooring lines to a ground chain on the shore.

Sandhaven. Dry out in the Eastern basin.There are no charges for visitors but a donation would be appreciated.

Rosehearty. Alongside the pier wall or anchor in the inner harbour. If stopping overnight the charge is £20 but the harbour is included in the Aberdeenshire “Rover Ticket” scheme.

There are public toilets at both locations but neither village supports a garage so if fuel is required you would have to go into Fraserburgh.  There is an hourly bus running through both villages to Fraserburgh.

There doesn’t seem to be even a fish and chip shop but you may find bar meals in one of the hotels in Rosehearty.

Sandhaven has a shop/Post Office on Main Street a pub on Shore Street (to the West of the harbour) and a pub on Main street.

Rosehearty has three public houses/hotels and several small shops. Rosehearty also has a golf links but it does not have a Clubhouse

Got a comment to make about Rosehearty and Sandhaven  ?  Have you found this coverage helpful ?   HAVE YOUR SAY   (your email address will always be kept private)

Have your say
2 comments
Update Early Summer 2021
Written by Don Thomson 3 | 2nd Jun 2021
I reviewed these notes in June 2021. Both harbours have gone for the cheaper plastic solution for adding pontoons and the new berths will be taken up by local day-boats. Sandhaven has the vision for a new marina but they haven't the funding yet.
UPDATE SPRING 2018
Written by Don Thomson | 13th Apr 2018
There are no changes at Rosehearty but Sandhaven is making strenuous efforts to reinvent itself as can be seen by the improvements to the central pier 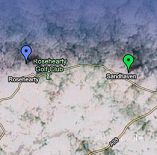