Must call HM on VHF 12 for permission to enter and obtain docking instructions. No anchoring inside the harbour.

Pentland Firth to the East

We have included Thurso in these notes for the sake of completeness only to say that you don’t want to go there! The harbour at Thurso merely consists of reinforcement of the banks of the River Thurso, dries to a rocky boulder strewn bottom and has rocks and reefs guarding the entrance; best go to Scrabster.

On the other hand Scrabster is an invaluable haven for those cruising in these waters, it can be a bit open to the East unless you can get a berth in the inner Harbour (of which more later) but basically its network of Ro-Ro piers and docks within docks means that it is easy to get into, each entrance being narrower than the last so that, even in easterly winds the entrance is not hazardous. Your only problem is if you are coming from the East you have the Pentland Firth to deal with before you round Dunnet Head (or after, if departing to the East).

The harbour is situated about eighteen miles west of Duncansby Head in the Western corner of Thurso Bay; it’s sheltered from the north by Holborn Head, from the east by Dunnet Head and from the North East by the Orkneys. In NE winds you will get a considerable blow but there is not enough sea room for a swell to build up and block the entrances to the harbour.

There has been a harbour here since Viking times and the present harbour was started in 1841 and has been added to along the way. The ferry to Orkney was started up 15 years later and has been running ever since. The harbour is very much a commercial operation with quite a large fishing fleet coming and going from the fish dock and much HGV transport in support of that. It is also the main jumping off point for the Orkneys, serving both the tourist trade and the supply lines for the islands.  On top of that there are regular visits by cruise ships which attract the local souvenir vendors, pipe bands etc.  The main problem for cruising yachts in the past has been that there has been little provision for them here and nearest town is Thurso, over two miles away across the bay.

That has changed. Early in the summer of 2012 major work was undertaken to widen the pier between the Fish Dock and the Inner Harbour and  pontoons were installed in the innermost of the two inner harbours (See the photo in our gallery).  That installation of pontoons was completed and, at the moment, there are some visitor berths on those pontoons.

From the West there is very little to trouble you,.....

.... just watch out as usual for creel markers and give Holborn Head a reasonable offing (it is steep too and has very little in the way of overfalls);

You should call the Harbour on channel 12 for entry instructions and they will expect you to defer to commercial traffic to a certain extent but they tend not to issue priorities; as long as everyone is aware of everyone else they leave you to get on with it yourselves. Watch out for the inbound Orkney Ferry as he will approach very fast and, at the last moment, turn to port and then reverse in to the dock.

From the East you’ll be coming round Dunnet Head and straight across the bay to the harbour; stay a bit out from that headland as there are still the dying efforts of the Pentland Firth running past and also it’s quite high and can throw down quite a wind shadow.  It is also a popular spot for creel potters.

At night it will be a bit confusing as there are lights on the ends of all the piers all of which are against a background of sodium floodlights.

For the tidal streams through the Pentland Firth there are zoomable charts and full descriptions available at:

There are pontoon berths available to visiting yachts in the inner harbour from the summer of 2013. You must call ahead and advise the harbour of your intentions and requirements, especially if you need shore power which is only available on the pontoons.

If you get a pontoon you'll be charged £20 per night plus £2.71 for electricity. On the wall it's £15 per night Just call on VHF 12 and the HM will allocate a berth (if you need shore power you should mention it and maybe you’ll be lucky!)

It is possible that the entrance to the Inner Harbour may be obscured by a large vessel moored against the wall on the port side opposite the Ice factory just before the turn in to enter. Give yourself enough room for a final 120 degree turn to port when you have cleared that ship's bows/stern. 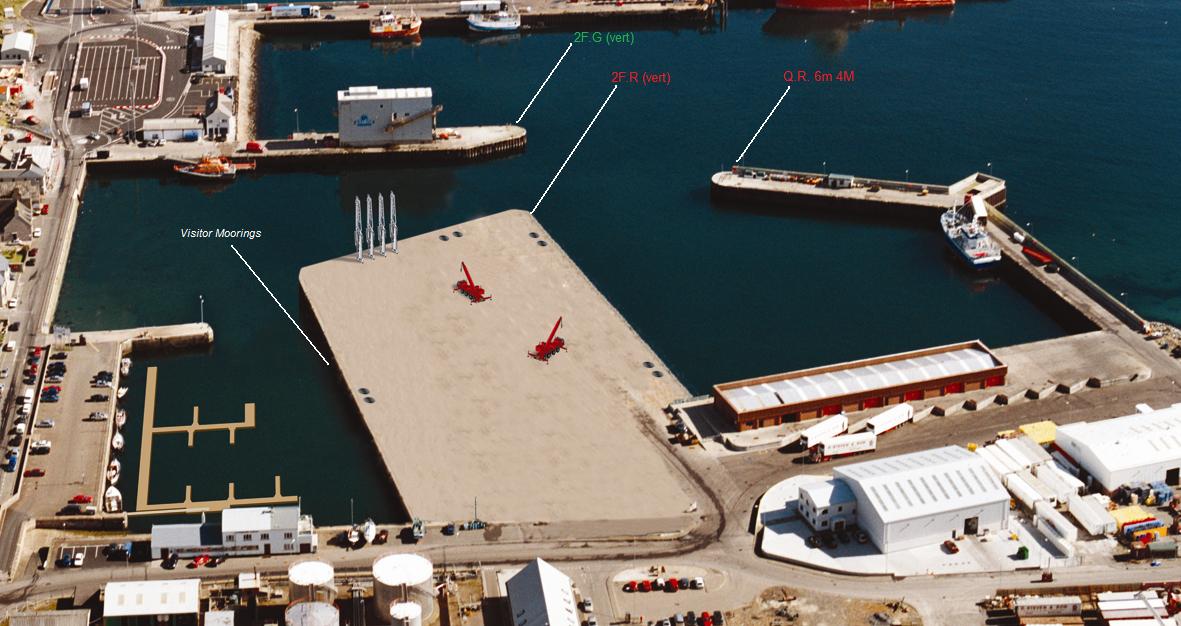 We can confirm that the Port still keeps a berth on the pontoons free for visiting yachts and that there is power and water there.  It would be a good idea to ring ahead from your point of departure (difficult if coming from the West, I know) and let them know that you are coming and if you require shore power.
Their alternative is a pontoon on the East side of the pier with the Ice House on it and there is no power or water on that.  You should expect to end up here if multi-hulled.

Shore power and wateron the inner harbour pontoons. Our previous info that there is an amenities block was incorrect and the only showers are in the fish market or the Seamans mission.
For all provisioning you will need to go to Thurso or at least to the LIDL bus stop near Thurso.  There is no public transport from Scrabster to Thurso apart from:-

http://www.stagecoachbus.com/   for the X99 service from Inverness to Scrabster. This runs about twice a day to match the Orkney Ferry and stops in Thurso.
There are always taxis

A company called Simpsons Oils supplies Diesel in the harbour and you should call 01955 604444 to make arrangements with them.

Petrol is available in cans at the garages in Thurso on the opposite side of the bay (they won't dispense it in the harbour)  Gas & Gaz is also available at W & D Ross, Riverside, Thurso

There are various workshops and boat yards around the harbour if you need to scrounge for spares but no yacht chandlery per sé.

You will find a café at the Ferry terminal but the best place to go for breakfast is the Seamen’s Mission.  For more up market eating there is the Ferry Inn pub/restaurant near the Harbour Office. There is also a small seafood restaurant called the Captains Galley but it is uncertain whether that is still trading.

Other than that you will need to go to Thurso which has some excellent shops and food outlets. The Caithness Horizons Museum is worth a visit (they do a good coffee there) as are the castle ruins on the East side of the river.

Got a comment to make about Scrabster & Thurso  ?  Have you found this coverage helpful ?   HAVE YOUR SAY   (your email address will always be kept private)

Have your say
3 comments
UPDATE JULY 2022
Written by Don Thomson 3 | 14th Jul 2022
I've done a thorough edit of these notes this year as so much has changed. No public transport, the garage halfway to Thurso has closed, the Caravan site no longer does gas bottles. The only thing that hasn't changed is the Tariff for yachts!!
Update Early Summer 2021
Written by Don Thomson 3 | 3rd Jun 2021
I reviewed these notes in June 2021. Firstly thanks to Terry Robinson for his photo of the new pontoons in the inner harbour. We've found this summer's charges for a visiting yacht. The information about the amenities block was incorrect and I've had to edit that out.
UPDATE SPRING 2018
Written by Don Thomson | 16th Apr 2018
There have been further improvements here for the wandering yachtie; they have an amenities block! So no more wandering through the dock to the Sailing Club for a shower.