Ruined breakwater on South side of harbour entrance

Port Erin is a small holiday town on the West coast of the Southern tip of the Isle of Man and is the alternative to Port St Mary when the wind is in the East.  It’s basically a pretty spot, originally a fishing village, which became popular in the late 19th century as a seaside resort and, as such, mirrors similar villages all over the British Isles; the main buildings are residential and the main shops are focussed on the holiday trade. The result of its popularity as a quiet seaside resort is the phalanx of hotels overlooking the bay from the rise behind the beach.

There are the remains of a protective harbour wall on the South shore of the bay; this was built in the middle of the nineteenth century but only lasted about ten years before it was wrecked in a storm. It remains as a hazard to shipping and carries a Starboard Hand marker buoy.  Closer in is a small pier (Raglan Pier) carrying a green light at night which protects a small drying harbour normally occupied by fishing boats on running moorings in the season but if you can dry out you may be able to tie up here, but don’t bank on it.

The bay becomes very violent in anything from the SW through to the NW and if those conditions are forecast you’d be better off either running up the coast for ten miles to Peel or nipping through Calf sound to Port St Mary (about five miles), but if you choose St Mary don’t leave it too late because the sound will become un-navigable.  Mind you, I wouldn’t wait too long either if deciding to go to Peel; it’s a pretty inhospitable lee shore to be caught on, and watch out for that wreck.

There is an IOM harbour information website which lists all the IOM harbours and a whole raft of downloadable docs (most of which do not apply to cruising skippers) at:- Isle of Man Government - Harbours Information

We suggest that if you are spending any time in the Irish sea with regular visits to the IOM you visit those two internet pages, print and add them to your Pilot Book.

The Southern Duty Officer is, in fact, the Harbour Keeper for Port Erin, Port St Mary, Castletown and Derby Haven. Any of the phone numbers or #12 is likely to be rerouted to the Marine Ops Centre.

The approach from the North is simple as you just....

....... come round Bradda Head and the bay opens out for you; the only danger on the coast coming down is that wreck which is marked as a hazard to shipping.

Coming up from the South you either give the Chicken and the Calf of Man a wide offing (to avoid the overfalls) or you come through Calf Sound.  You can pass between the Chicken and the Calf but this probably is not much saving in distance whereas going through Calf Sound from St Mary is a definite saving over going the long way round outside the overfalls (It’s half the distance).

Calf Sound is one of those places which carries a lot of hype for leisure sailors but basically if you do your sums and don’t try it in bad conditions you’ll come out the other side wondering what all the fuss was about.  The North going tide starts an hour and a half before Dover and the South going four hours after HW Dover.  Your main problem is that when the stream is slack and turning North there is still an easterly flow from the Chickens towards St Mary so to reach the Sound at slack from St Mary you’ll have to peg a bit of current.  Rest assured that to go through a couple of hours into the North going stream doesn’t pose much of a problem; just don’t try to go through against the stream!! The other thing is that the locals advise you to pass close to Kitterland once you’ve passed its Southern tip; the writer was passed to starboard by an accompanying boat of similar draft when North bound and thinking he was close!

The word to the wise is don’t attempt it in a wind of over force 3 against the stream in either direction or at night, and make sure your engine is in top working order.

As you enter the bay from the South be very sure that you have identified the SHM in the middle of the bay and pass to the North of it; do NOT cut the corner

As has been said, although there is a small drying harbour here

...... you are unlikely to find room due to the running moorings of the local fishing boats, but, you never know it’s worth a look if you can take the ground.

The choice after that is to pick up one of the two visitor’s buoys (for which you will be charged if the harbour “Keeper” of Port St Mary catches you on his daily visit) or drop anchor outside the mooring buoys.

There’s a water tap on Raglan pier.  There are public toilets ashore, about halfway along the beach unless you pop in to one of the nearby hotels. (It would be unfriendly to flush your sea toilet in this bay).

Port Erin has much more in the way of shops than Port St Mary; it has a small Co-op, a bank and a petrol station all on Station Road.  There are also a diving shop, a fishing tackle shop and a water sports shop which is also home to an RYA school.

Transport to Douglas via bus or the much acclaimed narrow gauge steam railway.

This is a seaside resort so has much of the usual things on offer in the way of hotels and restaurants; for reports on some of these see:-

There are nice cliff walks and the steam railway, with its museum, for amusement, other than that most people come here for the beach.

Got a comment to make about Port Erin ?  Have you found this coverage helpful ?   HAVE YOUR SAY   (your email address will always be kept private) 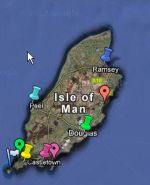