Your Comments: 2 Read or add your comments

Until the mid 1800s when the railway arrived this was a small fishing village but that arrival heralded the beginning of Portrush as a holiday resort.  After the railway closed (thank you Dr Beeching) the town suffered a decline but for the last few years it has gone from strength to strength, has returned to the years of its hey-day and is once again the playground of Northern Ireland. A major part of its attraction are the superb beaches; the of white, gently sloping sands are a safe place for children to play and for grown ups to relax (if a little crowded on a summer weekend)

In May the town and the roads behind it host the North West 200 which is a motorcycle road race to equal the Isle of Man TT and in September it is the venue for the Northern Ireland International Air Show each of which attracts over 20,000 visitors to the town.  At the weekend in the summer throngs of visitors pack the beaches, amusements and pubs whilst for the rest of the year it is the centre for the night life of the population of the hinterland (remember that Coleraine is a University town... most of the students come here to play)  Virtually all the pubs have live music of one sort or the other (The Springhill Bar on Causeway Street has an Irish “Session” night on Thursdays) The result of this is that the visiting yachtsmen will find plenty to entertain themselves and their crews (old or young) and a visit to the Tourist Information Centre (about 15 to 20 minutes walk from the harbour) is recommended.

The harbour itself is fairly busy but there should be no problem finding a berth for the night; the Yacht Club is very welcoming and has showers in addition to the new harbour amenities block (see below)

There are plans for marina type facilities for mooring but they are a long way into the future.

Watch out for the counter current here.

It sets in round the bay about a quarter the way through the ebb and continues for the whole of the flood.    There are rocks extending out 20m from the North Pier head (port hand side inbound); these are very close, port side, to the lead in marks; combine these with the tide running from right to left and you could run into problems.     Onshore winds above F4 make the harbour entrance very difficult due to the ground swell.

Approaching from the West is fairly simple whether one is coming from Donegal or Lough Foyle (outside or inside the Tuns off Magilligan point); Once clear of Balbane Point (North West of Inishowen Head) or clearing the Tuns one can lay a course directly for the Initial fix or even the harbour mouth and one will be clear of all dangers.

From the East coming through the Skerries Sound is eminently feasible, preferably on the ebb with the wind behind one. If the wind is anything F4 or above from the West or North West take the outside passage and forget about going in to Portrush at all; a good bet in those conditions would be to seek shelter in the lee of the Skerries and drop the pick there. Although the water to the East of the Ramore promontory looks sheltered there are rocks there and it would be unwise to approach there without local knowledge.

Once you have positively identified Reviggerly (the three rocks off the NE corner of Ramore point, which at low tide look like one) there is no problem scraping round the next headland (it’s steep-too) inside any overfalls and slipping past the cliffs to the harbour entrance, but remember you will be aiming to pass through this passage at, or just after LW Portrush to avoid having to peg the counter current later in the tide.  Be very careful entering the harbour; there is plenty of water in the very centre of the entrance but it shelves very quickly to shallow water towards the North Pier where drying rocks protrude into the entrance.  Whatever you do, don’t cut the corner tight to the N Pier; there are lead in marks on a bearing of 028 which are only lit when the Lifeboat is out – the for’d one is on the small bridge at the NE corner of the harbour and the one behind on a mast (red triangles).

Once inside the harbour entrance an alongside berth....

..... can be found on the North wall or pontoon in 3 m+.  The pontoon is only suitable for an overnight berth and has to be cleared by nine in the morning.  There are plans afoot for improving the moorings in the harbour over the winter of 2016/16 but, as usual, funding and permissions is a problem.

The tide range in this harbour is only a metre at springs so one does not have to leave a massive scope on the lines.  It is sometimes possible to pick up a mooring on the South side;  the HM  ( VHF#12 or tel 028 70822307 Mobile 07889081860 )  can advise on this and, although it means pumping up the dinghy to get ashore, this would be a more comfortable berth when there is surge in the harbour from West or Northwest winds.

Water and shore power are available at the pontoon and arrangements can be made for diesel to be delivered there. If you need petrol, that’s about 3/4 mile from the harbour on the Bushmills Road.

Showers (coin op) and toilets can be found in the harbour amenities block with toilets, showers and laundry facilities.

The streets overlooking the harbour are mainly B & B and Bars, for provisions there is a Costcutter and a Bank (with an ATM) on Main Street which is a couple of streets back from the foreshore.

There is an active Yacht Club where we once had to take showers; they still welcome visitors and their website is   http://www.portrushyachtclub.com/

One is spoilt for choice: near the harbour virtually every other premises is licenced and they are interrupted by take away foods, souvenir shops and amusement arcades.  Most of the pubs offer pub grub and live music and there are the usual seaside resort cafés and eateries. For the main bars see

There are two golf courses and, as has been said, information on local events and entertainment can be found at the Tourist Information Centre to the South of the Harbour.

Giants Causeway.   This famous tourist attraction is a mere half an hour’s bus ride from Portrush. The service is operated by Ulster Bus and is service no 177
https://www.translink.co.uk/Documents/footers/visitors/North%20Coast%20Booklet%20200711.pdf

On the other hand, Port Ballintrae anchorage is only five miles along the coast... if you are lucky enough to find a day with balmy southerly winds, a flood in the morning and ebb in the afternoon then you have the recipe for a lovely day out. You can either walk round the beach and cliffs from Port Ballintrae to the Causeway or wander up to the main road and pick up the bus (they’re about every two hours and is the same bus you would have taken from Portrush!)

Got a comment to make about Portrush ?  Have you found this coverage helpful ?   HAVE YOUR SAY   (your email address will always be kept private)

Have your say
2 comments
Update summer 2019
Written by Don Thomson 3 | 28th Jun 2019
These notes were reviewed in June 2019. The dredging work in the moorings area has finally been finished so less noise!! We've uploaded new charts and added a link to the Portrush Sailing Club.
Update 2015
Written by dononshytalk | 10th Apr 2015
These notes were reviewed by Don in April 2015. There are plans for improvements to the pontoon, its security and the amenities available for the visiting yacht but for the moment everything is much the same as it was. 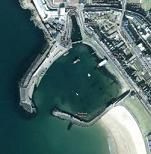