Cruising on the West Coast of Scotland

Cruising on the West Coast of Scotland

This is a very popular cruising ground, which is unsurprising as the scenery is stunning, the sailing is excellent and there is a sense of “exploring”. Unlike other parts of the UK there are still many, many little coves and inlets where one can drop anchor in almost complete isolation; there isn’t a marina occupying every bit of sheltered water and charging the earth to use it.
Since writing this article that has changed a little; in the Outer Hebrides there is now a marina at Lochboisdale and one at Lochmaddy whilst Castle Bay on Barra has an increasing number of pontoons (two!) and there is a pontoon now at East Loch Tarbert on Harris and a pontoon on the NW side of Scalpay. Uig on Sky has a pontoon and some visitors' buoys and there is quite a large pontoon now on Ghia.  At the same time the single pontoon at Port Ellon on Isaly has blossomed in to a full marina as has the single pontoon at Kyle of Lochalshe (which has been taken over from the highlands Council by a local trust)

These notes were compiled after a limited amount of cruising in these waters and I am conscious that there are many sailors in these waters with vastly more experience of sailing them than myself. Apart from this summer cruise, I’ve sailed between Crinan and Fort William several times and made about half a dozen runs through the Caledonian Canal*. It should be noted that pretty well all the boats I encountered were over thirty footers whereas I was in a 22 foot bilge keeler with only a very senior 15HP two stroke outboard as auxiliary power; and it was consuming far too much petrol (Full fuel load was 75 litres in various containers and the engine used 4 litres/hour!!).

Since those first notes the author has spent many summers cruising these waters and discovered new places every year. The bigger places have found descriptions on this website and the smaller ones, like Scavaig (you can just see my yacht peeking over the hillock in the foreground) will remain as memories.

I’ve always had fairly up to date copies of the Clyde Cruising Club notes and some older versions of the Imray publications on board. Equipment wise I had a small Garmin Chart plotter, backed up with the VMH Sea Clear chart plotter on my laptop (with two spare oversize spare batteries) I was also carrying a Clarkes 1KW petrol powered inverter generator. My bower anchor had 40 metres of cable and I had a 10lb CQR with 4 metres of cable and then warp as spare. Fresh water capacity was 10 gallons in a collapsible tank under the forward bunk. Communication was by VHF radio, mobile phone (Orange) and internet via a Virgin Media Dongle on the laptop (or Wifi ashore). Gas was in 6kg Camping Gaz cylinders of which I carried three (one was used for heating in the earlier parts of the cruise)

Information for sailing in this area is plentiful but by far and away the best is in the Clyde Cruising Club publications and, over the next few years, they are going into co-operation with the Imray Publications and they already have two new publications for 2013/14 (Clyde, and The Outer Hebrides) going into print with another (Ardnamurchan to Cape Wrath) which will be ready for the 2014 season. These publications will combine the information previously held separately. As to charts; on this website we have access to the whole of the UKHO charts in various formats from which you can choose. It is worth noting that a private organisation (Antares charts) has surveyed many of the anchorages on this coast and they are in a format which dovetails nicely with the UKHO charts on SeaClear. The publishers of the Antares charts emphasise that they are an amateur organisation of enthusiasts and that their charts should not be used as a stand alone source for navigation but used in conjunction with other sources. 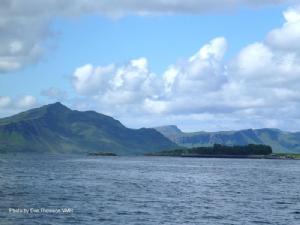 We mentioned in the opening that “there isn’t a marina occupying every bit of sheltered water and charging the earth to use it.”; that probably is one of the main attractions but it has the drawback that one doesn’t have the convenience of being able to top up one’s supplies every day. One needs to plan a cruise in these waters with the lack of services in mind. Tobermory (at the North end of the Isle of Mull) is about the last place, northbound that you will find a full range of facilities; after that you will find a dearth of petrol, gas (& especially Gaz), large supermarkets, shore power, toilets and showers, oh, and Sunday opening.
Having said that there is a large Co-op at Kyle of Lochalshe and a large Tescos at Stornoway but between those you are lucky to find a Spar shop, and the "shop" at Plockton is so discreet I walked past it twice in search of it!!

If you have a large boat with plenty of power generation and the luxury of onboard showers and refrigeration you will have few problems but the smaller boat will need to provision with sufficient dry goods, spare gas bottles – and if your auxiliary is petrol powered you will need to carry a fair bit in reserve. If intending to use port facilities you can expect to fork out £25 to £30 per night for a 10m boat with shore power (where available) at an additional cost of about £3.00 per night; where visitors buoys are provided they can be as much as £15 a night. It is worth noting that the Highland and Island Council does a two week "Crusing Licence" for the harbours they "govern"; includes  Kyleakin, Gairloch, Portree, Lochinver and Kinlochverbie.

Weather!! Need we say more? This part of the UK is renowned for its rain and winds but, on the other hand, it is renowned for its beauty on a sunny day. I could generally find some way of getting the daily inshore forecast, either from Stornoway Coast Guard by VHF or on the interweb thingy. Sailors in other waters will be used to the wind being “onshore” “off shore” or pretty well parallel to the coast; not only that, in most cases the wind direction will be fairly in line with the Inshore Forecast. Not so here; the wind tends to be modified by the topography of the surrounding land so that, in most cases, it conforms to the shape of whichever loch you are travelling up (or down) – and will shift to conform to that shape. 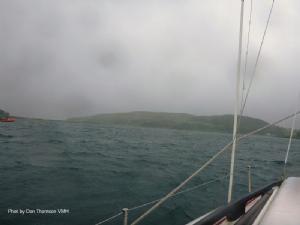 That would be ok but you also have to bear in mind the glens and mountains further inland which can hurl a beam blast at you and catch you all aback in an instant. There will seldom be a day when you will experience the same wind conditions throughout and who ever has the watch should remain alert.

On the other hand a lot of the passages are “sheltered” in that, although the wind may be quite strong, in many cases it hasn’t had enough distance to set up a swell and you end up skating across spume covered one foot waves at very respectable speeds. Of course that is not the case where the sea is open to the Atlantic – and there a force 4 wind produces a force four swell and sea state.

The old adage “If the sun’s shining it’s going to rain” applies here and equally to the wind. It was also found that quite often the day would start out almost calm and have half a gale blowing by lunchtime – and that was without the passage of a front or change in direction. Thus the forecast could be for 3 to 4 and occasional 5, and dawn would break to a flat calm; rest assured that the likelihood was for the wind to reach its forecast before standeasy!! Ok, that doesn’t sound significant but up here the sun rises at just after 4.00am in the summer and there can be enough light at 3.00 am – it’s worth getting up early to see if the weather is any good despite the forecast.

There is another effect of this windy stuff; it can funnel down out of a glen into what looks on the chart to be a sheltered anchorage and you should always plan your overnight stops with that in mind but you will constantly be surprised.

The other problem with the wind is that an anchorage supposedly in the lee of the land may not be so because of a glen funnelling the wind from the land and through the anchorage; you have to look at the land contours on the chart and be prepared. An example of this is Portree on the East side of the Isle of Skye which is renowned for it’s strong Westerly winds and the old hands will use the bay round the corner in those conditions (some locals even have spare buoys laid there, just in case!)- in Westerlies??!!

I found quite often that I was veering at least the minimum amount of cable (and often much more) to be half way certain that it won’t drag. (and still waking with a start in the middle watch to stick my head anxiously out of the cockpit!)

I also found that, as well as the wind coming from an unpredictable direction, in quite a few places the tide did as well. For some reason I expected the tide to flow around the Isle of Mull and into the Sound of Mull from the Northern end – but it’s the other way round (still can’t get my head around that!) Similarly the streams around the Small islands are a riot so tidal streams have to be researched because they can be opposite to that which one would expect (and, of course, back eddies abound).

Having said all that and issued dire warnings, with time to spare, fuel and food a’plenty, no particular destination in mind and a sound boat this is a cruising ground which will never cease to provide pleasure rain or shine.

Seasickness.. this has worked in chronic cases
King's Quay Creek- who's blocking it ? UPDATE Aug 2020
From Dublin to Bangor and back with the tide all the way !
Buying A Sailing Yacht Unseen - Our Journey From Eastbourne To Ramsgate (Part 2)
Buying A Sailing Yacht Unseen - Collection and Sail From Cowes To Eastbourne (Part 1)
Weather Forecasting in UK Waters, Using Barometer Readings and Local Observations
The Weather at Sea, Explanations plus the Beaufort Scale
Chart Navigation Tips - Do Your Know These Five Danger Symbol Secrets?
Know the Wind - What is True, What is Apparent
Chart Navigation Made Easy - Five Tips to Make Sailing Navigation Fun!
Sailing Navigation Secrets - Do You Know Your Sailing Right-of-Way Rules?
Sailing Navigation Secrets - Seven Nautical GPS Alarm Tips You Need to Know
Coastal Navigation, How to Double the Angle on the Bow
Crossing a Bar- 9 Rules to Keep You, Your Crew , and Your Boat Safe