AIS receivers for small boats can be considered an aid to navigation, allowing the skipper to monitor and track large ships in his vicinity. Primarily the skipper would use this as a collision avoidance tool. It is similar to radar, but not the same. For instance it can't detect landmass, small craft, rain squalls, etc. 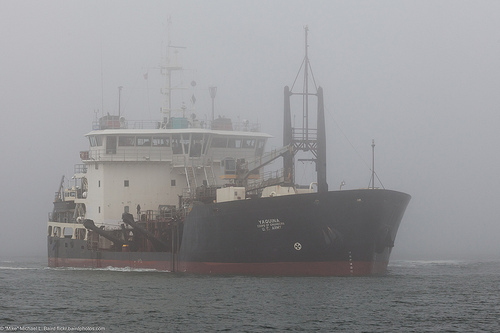 Vessels fitted with AIS transmitters (Ships over 300 GRT and all passenger vessels), send out on VHF channels (Channel 87 and 88) data concerning their course, speed over the ground, rate of turn, position, true heading and the vessel's Maritime Mobile Service Identity (MMSI) – a unique nine digit identification number. An AIS transceiver sends this data every 2 to 10 seconds depending on a vessel's speed while underway, and every 3 minutes while a vessel is at anchor.

Other information is transmitted every 6 minutes: IMO ship identification number, radio call sign, name, type of ship/cargo, dimensions of ship, draft of ship, and the destination and ETA (down to the crew entering this information diligently !)

The same messages are broadcast alternately on the 2 separate channels in case of heavy interference. Therefore it is possible to have one ship transmitting on channel A, at the same time as another ship transmitting on channel B. There are systems in place to avoid 2 ships transmitting at the same time on the same channel and interfering with each others transmissions. Receivers for the leisure market fall into 2 different classes, those that monitor the 2 channels continuously, and those that jump between the 2 channels (or fix themselves on just one).

Bearing in mind exactly the same messages are broadcast on both channels, for leisure use in a slower boat (sailing-yacht) the cheaper receiver is probably sufficient. (This is not precisely true, as the ship may have moved position slightly in the 2 to 10 seconds between transmitting on one channel and then the other)

For a faster motor yacht, capable of 20 knts +, it may be worth going for the dual channel receiver. At these speeds it has a better chance of collecting the relevant information quickly enough to be of use at high speed.

Given a bit more time (we're only talking minutes) the single channel receiver will pick up all the same messages. Receivers that continuously jump between the 2 channels are always at risk of being just "out of synch" with a ships transmissions. Eventually the transmitting ship and receiver will be in synch and the message will be received. As always there are pros and cons to each method.

The range depends on aerial positioning, but with a decent separate VHF aerial mounted on the stern rail (doubles up as an emergency VHF in case of dismasting etc), the range is likely to be about 12-15+ miles in all directions for receiving Class A (Big Ship) transmissions. Smaller ships and leisure craft can use "Class B" transmissions at lower power and transmit less frequently. The likely range for receiving these "Class B" messages is likely to be significantly less than the Class A ones (due to height of antenna, power of transmission, and less messages sent).

The advantages of an AIS receiver for the yachtsman/leisure boater:

Now find out what is involved and the costs of this important aid to safety:

AIS what do we need ?

Installing an AIS receiver
AIS and NMEA multiplex equipment under £100 !